Top 12 Nursing Puppy Questions: How Much and How Often

Generally, there’s not much you need to do for a newborn puppy, but things don’t always go as planned. After giving birth, the mother could experience an assortment of conditions, such as postpartum depression or breastfeeding and lactation issues, which renders her unable to nurse her youngster.

If for whatever reason, you end up having to take care of your young pup, then these top 12 puppy nursing questions and answers will help you.

1. When Should a Newborn Puppy Start Nursing?

A newborn puppy should start nursing as soon as possible after birth.

Ideally, a young pup should nurse from her mother for the benefits of early breast milk. When born, a puppy has no fat reserves, which is vital to provide energy, he gets those from the mother’s milk.

When puppy drinks this colostrum, the maternal antibodies will be passed on, providing him with temporary immunity against diseases that his mother has been exposed to.

In order for the mother to keep producing milk for her growing puppies, you need to feed her with a diet high in protein and fat. As a general rule, the mother should eat three times more calories than she usually would.

2. How Long till Puppy Should Be Nursing?

A newborn puppy should nurse every two hours, four to six times per day. This process should continue until the mother dog has had enough, or until the pups are 5 or 6 weeks old.

3. How Long Can a Newborn Puppy Go Without Nursing?

In a case of emergency, a newborn puppy can last without feeding for several hours — somewhere between 3 to 8 hours. That being said, the longer she goes without feeding, the higher the risk of getting dehydration and hypoglycemia.

4. How Can You Help a Newborn Puppy Go without Nursing?

If the newborn puppy is not nursing well, or the dam is not producing enough milk, you need to bottle feed them. Another way is to place the puppy in the care of a foster mother dog.

The foster mother dog doesn’t need to be the same breed, but she should be the same size or a little bigger. If the adoptive mother is a much larger breed, the puppy would have trouble nursing and could be inadvertently hurt.

5. Can I Bottle Feed a Puppy Who Is Nursing?

Don’t give cow’s milk to the puppy since it will cause diarrhea and kill the puppy. Goat’s milk can be used in an emergency if you run out of the commercial formula.

To feed the puppy, hold them upright facing away from you or on her belly and then feed using a small bottle with a nipple. Remember, when feeding, do not hold the puppy on her back as they could be chocked.

6. What Can Be Used As a Nursing Bottle for Puppy?

As a nursing bottle for the newborn pup, you can either use a bottle or tube feeding. Smaller pups can use neonatal commercial bottles with small nipples, whereas larger puppies can use human baby bottles and nipples. 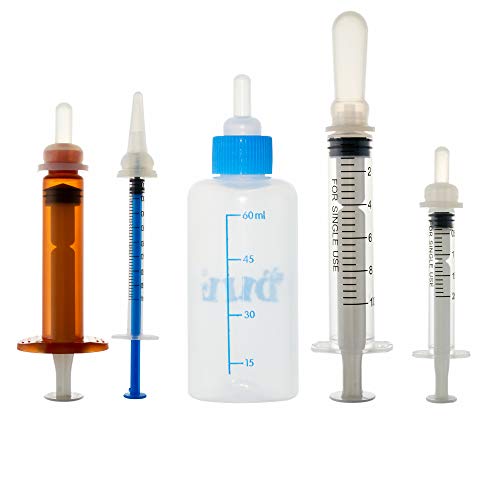 7. How to Make The Hole In a Puppy Nursing Bottle?

Nipples on the neonatal commercial bottles usually do not have a premade opening. To make one, you can use a hot needle to melt the hole.

Be careful when making the nipple opening. The opening size should be just large enough for the milk to slowly drip out, but not too large as to cause the formula flows rapidly.

8. How Much Weight Should a Nursing Puppy Gain Per Day?

Most newborn puppies start gaining weight after the first 24 hours. During the first week, healthy young pups should gain about 8% of their current body weight per day.

In the second week, their weight should increase by 6% of their current body weight per day, and about 4% in the first week, and 3.5% in the fourth week.

To get a correct measurement, you should weigh the newborn pups once a day for the first two weeks, then once a week after that.

9. How to Get a Puppy to Stop Nursing?

Weaning is the process of transitioning the puppies from nursing to eating solid food. You can start this process when your puppy is 4 weeks old. You can start feeding your pup with something simple such as a mixture of baby rice cereal and puppy formula.

As she is able to eat her first meal, you can continue the process with more solid foods like a blend of cooked lamb or cooked ground beef and rice, hot water, and puppy milk replacement formula.

As she is progressing, you can give her the food in a shallow pan such as a small cookie sheet. Keep feeding her for a few days, and as she is more interested in eating the new foods, and eating three times a day, she should be completely weaned.

10. Why Does Puppy Poop Smell so Bad When Nursing?

It’s actually a good thing that your puppy poops smell so bad, as long as she has frequent bowel movements, and the poops are soft, you have nothing to worry about.

11. When to Start Trimming Puppy Nails for Nursing?

Puppies instinctually knead when nursing, and long, sharp nails can injure their mother, causing her to stop nursing the child.

12. What to Feed Puppy If The Mother Stops Nursing Early?

Mix all the ingredients and serve the mixture at body temperature. Please check with your vet before giving your puppy this formula. PrevPreviousTop 5 Best Antifungal Antibacterial Dog Shampoos in 2020 for yeast, fungal, and other infections
NextAdams Flea and Tick Collar Review: Is It Worth it?Next