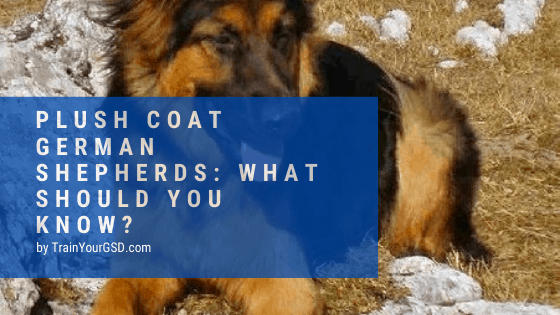 The short-haired German Shepherds have a double coat with a very short layer of fur that looks very sleek and smooth. They have a woolly and waterproof undercoat and a coat length of around 1 inch in length.

The double coat of a German Shepherd is said to be the most important feature of the breed. It protects them from both heat and cold.

What is even more interesting, though their hairs may be shorter they have more actual hairs than longer-haired German Shepherds.

Their undercoat makes them stay warm in cold weather, so if you’re thinking of adopting a German Shepherd, and you live in a cold climate, you may want to get the short-hairs.

Overall, they are closer in appearance to short-haired GSDs. They are double-coated meaning they have an outer and an undercoat. The topcoat is kinda rough to touch, while the undercoat feels like a wooly sweater.

These dogs have a much thicker, fuller, and longer length of hair compared to the short-haired GSDs and a much fuller undercoat too; although they don’t have feathering of any type. They have a coat length of around 1 to 2 inches in length.

Long-haired German Shepherds are essentially German Shepherd dogs with longer hair. They are technically called a long coat German Shepherd. In the breeding world, they are also referred to as “coat,” “coated,” “long coat,” “long stock hair,” or “Coaties.”

Some long-haired GSDs don’t have an undercoat, but some do have a double coat like their short-haired counterparts. The only visible difference between the two — short-haired GSDs and double-coated GSDs — is the topcoat.

In long-haired German Shepherds, the topcoat is heavier than the undercoat. They have longer and silkier hair (2 inches or longer) around their ears and on the chest, back, face, tail, and behind the back of their legs.

The actual hair of long-haired German Shepherds without an undercoat appears to be shinier. With long feathers and glossy hair, they look gorgeous.

While they may look beautiful, but without an undercoat, they actually weak against the weather and therefore never used for herding or hunting.

And for this same reason too, even though long-haired German Shepherds are still considered purebred GSDs, they are not recognized by the AKC. According to the AKC, a German Shepherd dog is required to have an undercoat, or they are considered to be a fault.

However, this standard seems to differ between kennel clubs. For example, the German Kennel Club and the United Kingdom Kennel Club do recognize long coats. (2,3)

The WUSV/SV has accepted long coats to be bred and participate in a dog show. And the German Shepherd Dog Club of America has created a conformation class for these Coasties. (4,5)

So, What Are The Fundamental Difference Among Short-Hair, Medium-Hair, and Long-Hair GSDs?

The length of hair among each coat is not the only thing that differentiates them, but it can become the main reason for many differences found in each dog.

For instance, if you’re looking for herding or hunting dog, the short-hair GSDs are a much better candidate for the job. Their hard-work ethic and strength against rough conditions make them a top choice for many roles like police dogs.

Because of their upbringing, short-haired GSDs tend to be somewhat aloof and standoffish toward strangers.

If you need a family dog, long-haired GSDs are a much better option. They prefer to stay close to their human family, extremely loyal, highly playful, ready to protect and enjoy playing with your kids.

In many cases, plush coat German Shepherds’ personality is more similar to the short-haired ones. However, it all depends on how you raise your dog because medium-haired GSDs have the same potential to become either working or family dogs.

Some people might think that short-haired and plush-coated GSDs shed more than long-haired GSDs. The fact, regardless of the coat length, all German Shepherds are heavy shedders.

They shed all year round, particularly when the weather gets warmer and they don’t need their double coat just as much as in winter.

When summer approaches, the short and plush coat GSDs blow up their thicker undercoat and replace it with a thinner coat to help cool down their body temperature. As the falls roll in, they dump their summer undercoat and grow back the thick undercoat.

While it is true that the short-haired and plush-haired GSDs appear to shed more as the hair they lose is more visible when you mop your floor. In reality, the long-haired GSDs shed as much.

Because of the long hairs, the hairs that are shed tend to get matted and stuck together. But when you brush them, you’ll see a lot of hair fall out. (see also: Best Brush for German Shepherds)

It’s recommended to brush them twice weekly, especially during hot summer months to keep your GSD’s coat stay healthy and tangle-free. During summer, your GSD could be wearing three layers: a topcoat, undercoat, and dead fur. Removing these dead fur will help them be more comfortable and relaxed.